i sigh, i exhale

I will be posting each day — African American Poets

Romare a haiku for you 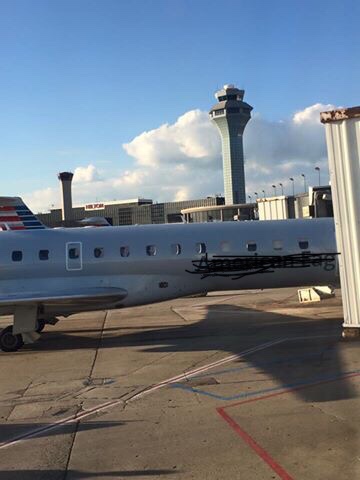 Part VII – “What a Wackadoodle”

It’s the largest bay window I’ve ever seen. Twenty-five feet tall by fifty feet wide, mostly glass with dark cherry wood trim. It was immense in its display and oblivious to the loud patrons in the bar.

“What a wackadoodle”, blared the rotund man with the rotund face. Laughter exploded at the table of six people where he sat.

“Don’t let him drive to the plant anymore”, piped the man with the scraggly beard.

“A u-turn over a huge median with a packed car. What was he thinking? What a wackadoodle”, the rotund continues.

“I thought the bumper was going to fall off”, said scraggly beard.

“The bumper did fall off”, retorted the rotund.

“Oh I know, that was when we arrived at the plant and parked”, replied scraggly beard, “I thought it was going to just drop off after the car scraped over the curb”

Laughter bursts from the junior members of this crew who sat at the table.

Not to be outdone by the rotund and scraggly beard, two gentlemen seated at the far side of my long tall table raise their voices several octaves.

“Frank doesn’t have a long term strategy”, says the man in the gray suit, white shirt and shiny black tie.

“You needn’t inform me. I know he doesn’t have a long term strategy”, says the man in the blue shirt and burgundy suspenders, “He is in it for the short term. He wants to get his bonus and run”

Gray suit bangs his hand on the table, “That’s exactly what I been telling people but who listens to me.”

Suspenders chimes in, “yeah, I been telling folk too but no one is listening.”

I can’t help but listen as I look out the window. I think to myself, this is one loud hotel lobby bar. The last time I heard this much noise at a lobby bar was in Chicago during the MLB playoffs when the Cubs were getting their butts kicked by the Mets. That was years ago and I sat quietly then as I ate just as I sit quietly and eat now. I check my itinerary for tomorrow. My flight leaves out of Newark at six-eleven in the morning. That’s why I’m spending the night at this full service hotel right here at the airport.

“Sir, can I get you something else?” asks my waiter.

“No, just the check. I got a very early flight in the morning. I’m turning in for the night.”

“I don’t blame you, I’ll be right back” says my waiter as he takes my cleaned plate.

I stare out the large bay window of the hotel. It is still and oblivious to the noise in the lobby. I’m not oblivious. I can’t help but hear: “What a wackadoodle…” 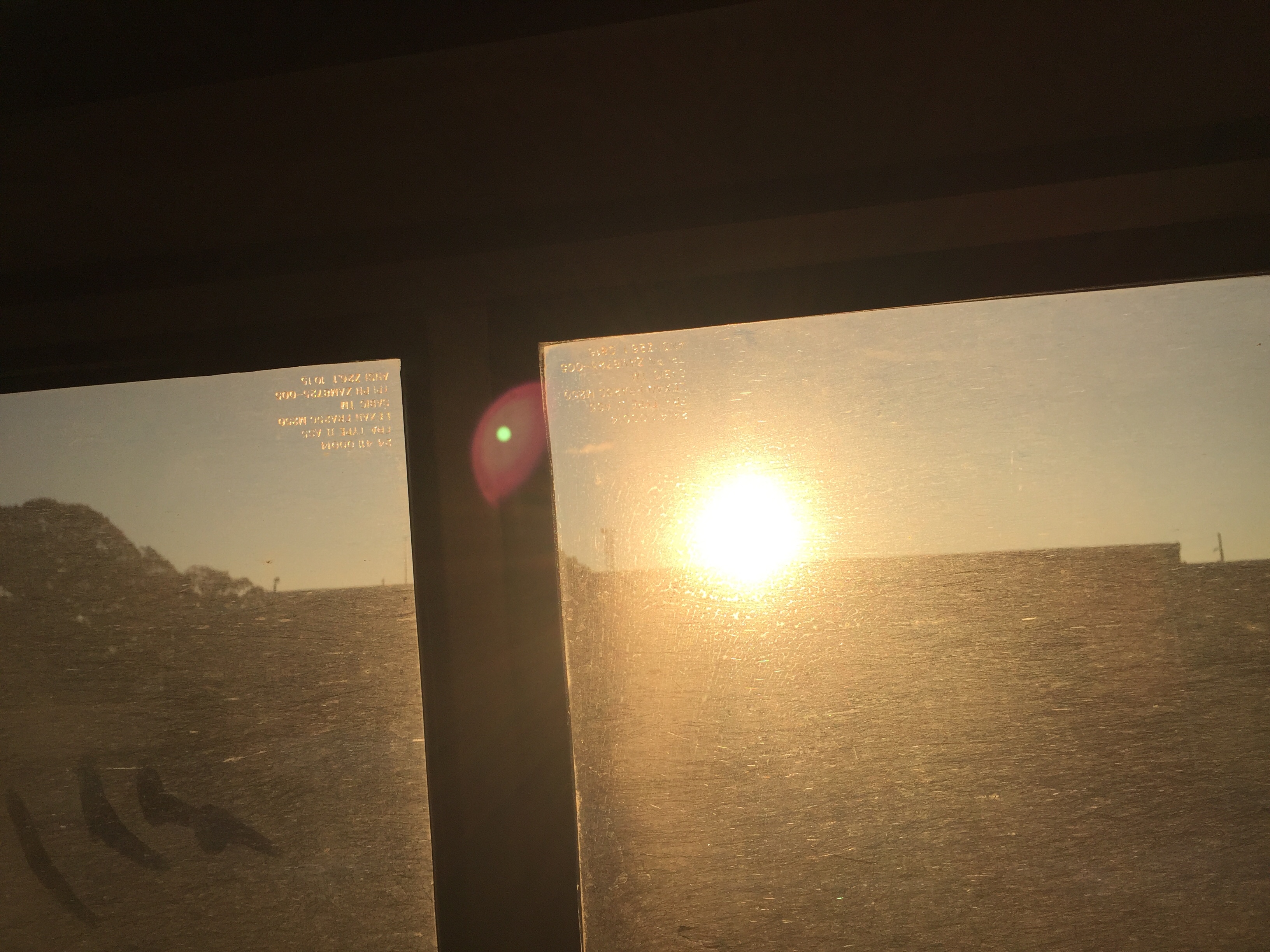 The sun, just risen, hovers just above the horizon. It beams. Its glow is a stunning gold which commands the darkness to leave us be as we start our day.

Black, sleek headphones cover my ears. Stanley is playing bass, “Lopsy Lu”—the recorded version. I pat my feet as I type on my phone with my thumbs.

I’m on a train traveling from Charlotte, North Carolina to New York City. We left the station five minutes ago and now we sit still as we wait for the freight train to pass us by. Down south freight trains have the right of way.

Once we start moving again, we will have 14 hours of riding ahead of us. I plan to to share a few moments of this ride with you on this blog. So, stay tuned and hopefully, enjoy. 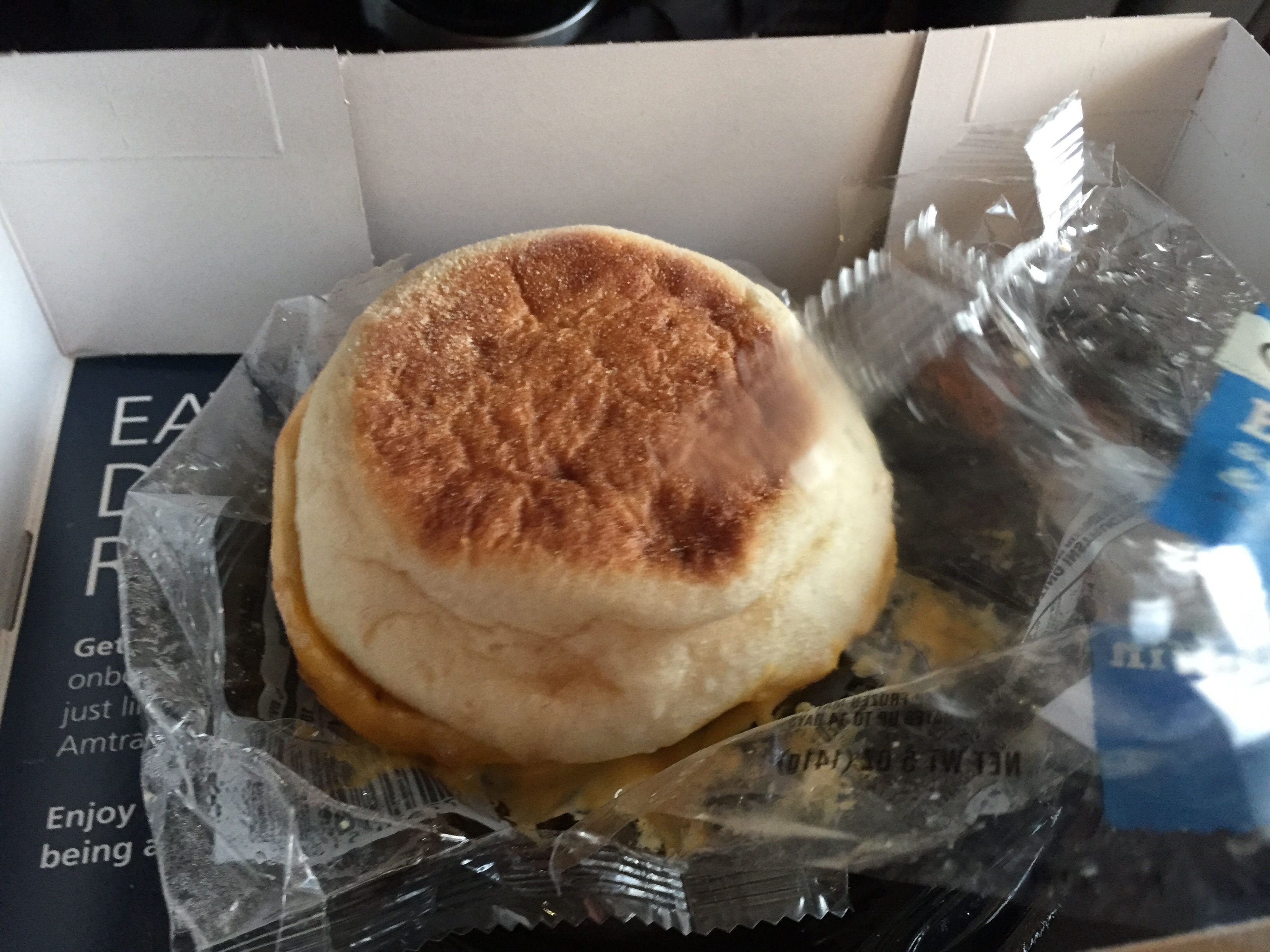 I must be careful. This egg, sausage and cheese muffin is fresh out of the microwave oven hot! My train, The Carolinian, has a dining car!

The Carolinian runs from New York Penn Station to Charlotte, North Carolina and vice versa. It is a day train, both ways, therefore you get to see many sights along the way.

We just stopped in High Point, North Carolina. High Point is known for making furniture. Sometimes it is referred to as the “Home Furnishings Capital of the World”. (Wikipedia)

My headphones are still on. Bono is singing “A Beautiful Day” and it is a beautiful day. The sun is spreading light across a cloudless sky. There is a haziness filtering the sunshine but that is of no consequence; the sun is in charge of this day.

My train moves down the track, Bono croons away, my sandwich is cooled off and Bon Appétit to me! 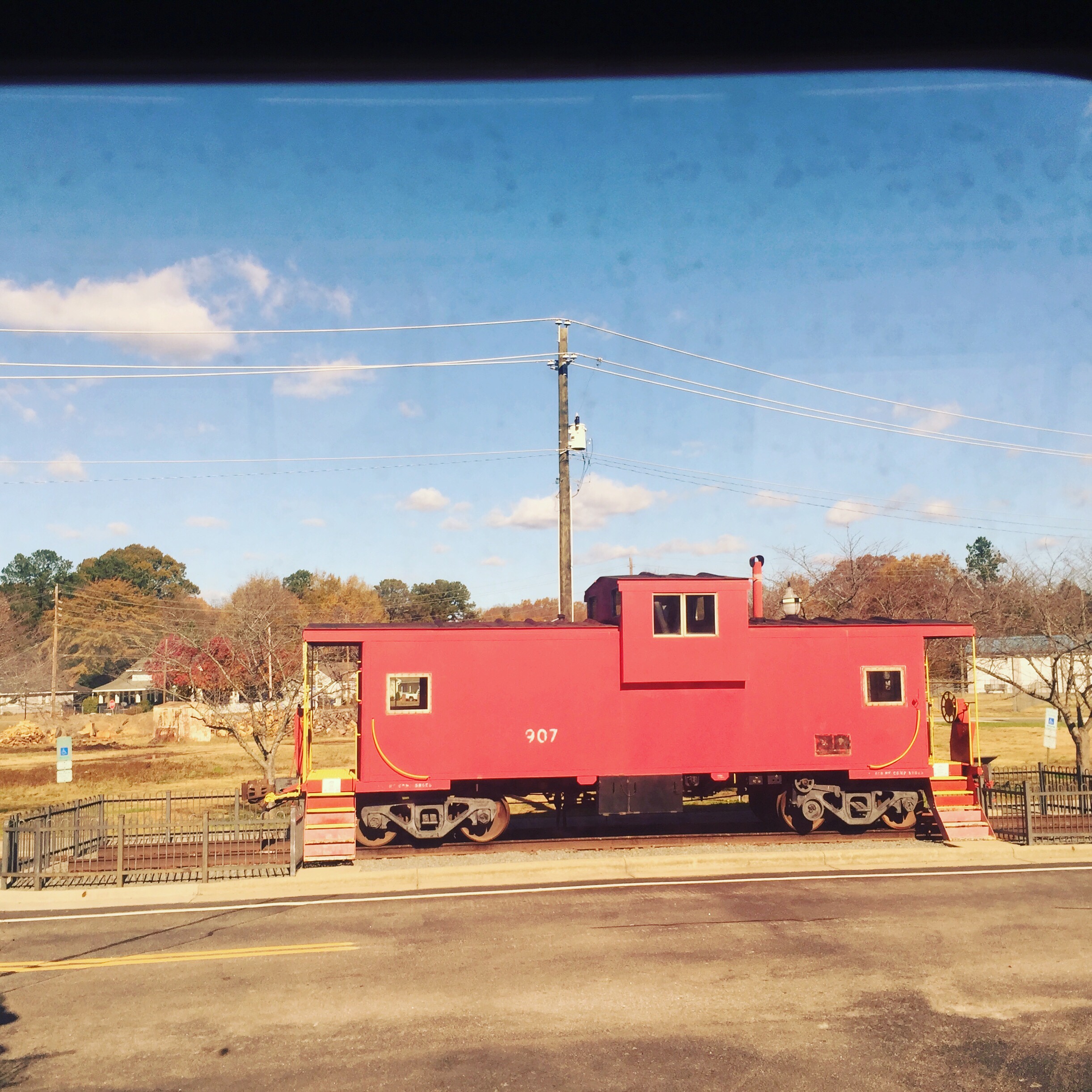 The voice of the conductor booms over our train’s intercom:

We are in Selma, North Carolina, population less than seven thousand, which hosts the annual “Selma Railroad Day” festival. The festival celebrates the railroad heritage of Selma. Festival activities include parades, music, vendors and plenty of food.

Though as a young man I had negative experiences with the Klan in a few of the towns near to Selma, I focus on the positive about this place. The red caboose that sits outside of the train station adds a little artistry to the place.

By the way, the seat next to me is totally empty. My luggage is stowed in the overhead. A little elderly lady approaches.

All bags stowed, both of us seated, she asks: “Where are you traveling to?”

“On to Richmond…” was the slogan printed on the New York Tribune front page by an impatient Horace Greeley in the early days of the civil war. Well right now we are approaching Richmond and we are not in the least impatient. We are enjoying the ride.

Listening to Eric Burden sing “Get Down” as we roll into the station. Entire families board. It is Thanksgiving week in the U.S. Mother’s are dragging reluctant sons, reluctant daughters and reluctant husbands down the aisle trying to find spots where they can sit together. Kids on school break carrying luggage, lunch and laundry follow close behind.

“It is Make a Friend the Train Day”, shouts the conductor over the intercom, “Move those bags off the seats and make room for oncoming passengers”.

“All aboard”, sings the conductor and onward to our next stop we go. 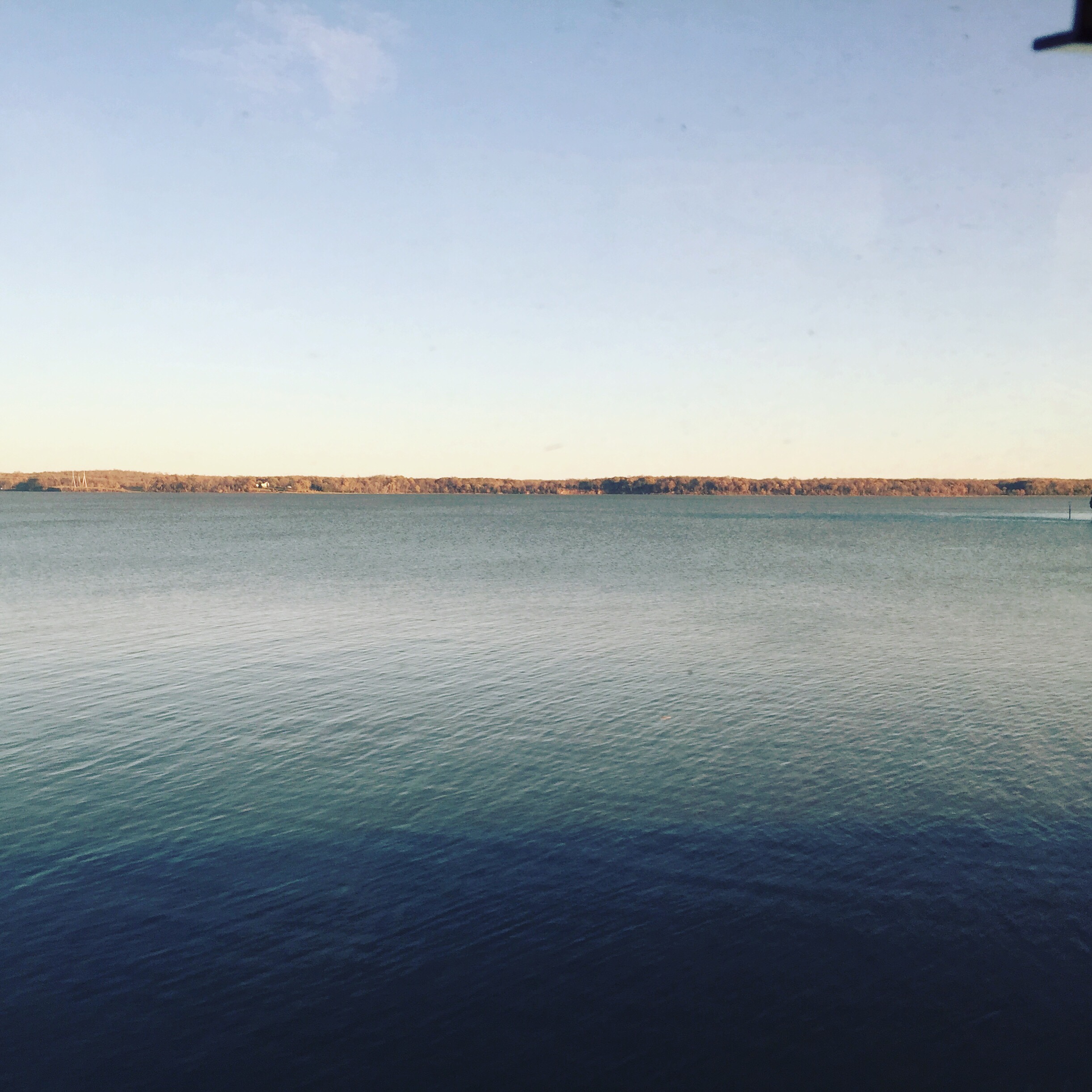 Quantico Creek looks so silent and so serious. Just like the bureau grads right around the corner, it seems to stand still in the sunlight wearing sunglasses and a conservative, gray wool suit.

“Sorry about making you work on a Sunday, Frank” said the lady with the gold rimmed glasses. She was seated right next to the service counter yapping away.

“I think the disaster recovery test was a disaster Frank. We need to pull everybody into a meeting tomorrow and do a post mortem on this.”

She stopped to inhale.

“I don’t care if it is Thanksgiving week. All hands on deck, Frank.”

I think to myself, Poor Frank.

I move my eyes to the service counter of the dining car. The dining car manager is taking the credit card of a patron.

“That will be ten dollars and fifty cents sir”, she said as she removed the cheeseburger from the microwave and plopped it in the cardboard carry tray.

After she slid the can of beer into the beverage slot, she turned to the register, swiped the man’s credit card, turned back, laid the receipt on the counter and gave the man a pen.

My attention turns to a young lady holding her baby in her arms in front of her as she bounces up and down in a little dance.

The little baby moves his hand a little, moves his little head around, lets out a little giggle and smiles. 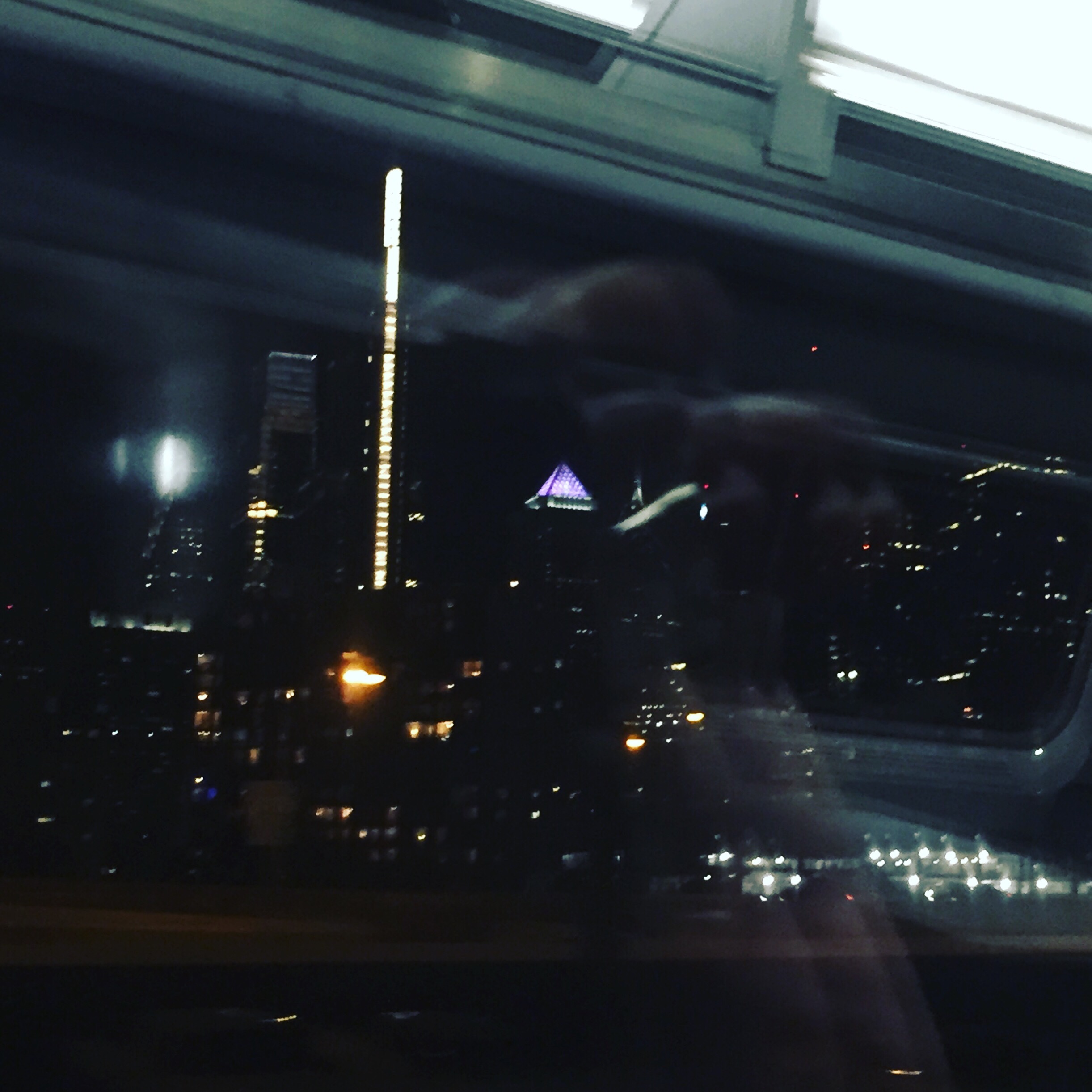 I wrote a poem titled “Train” once while seated on a train in Philly. It was accepted for publication a week later. Therefore, I have an affinity with Philly.

On that day I was only traveling from New York to Washington DC. I listened to Miles that day. Today is different because it is a much longer ride, Charlotte to New York.

Today I started with Stanley’s “Lopsy Lu” at sunrise, continuously looped with “Get Down” by Eric during the day. Now that the sun has gone down I’m staying with Eric and listening to “Slipping into Darkness”.

I’m still in the dining car. I peep at a young man ordering a soda and chips. He’s wearing 3 different watches on his right arm.

The dining car manager asks, “which of these is a designer watch?”

“The middle one”, replies the young man, “the one with the red face and gold hands. They match my kicks”.

He stood at about five feet tall and he was dressed in a sleek, satin, black gym suit. He wore red high top sneakers with gold colored shoelaces.

Indeed the middle watch was red and gold matching his kicks. The other two watches he wore were of a mere silver bracelet and leather band respectively.

“Young man, you look like you gots lots of time on your hand”, said the conductor to the young man as she walked through the dining car, “Hi Mary”, she greeted the dining car manager.

Hack, choke and wheeze went the guy who was trying to drink his beer. He just happened to be within earshot of the conductor when she made her comment.

“Yeah, she caught me off guard” said the man readjusting his baseball cap. Laughter from everyone, including the young man, ensued.

The friendly laughter continued as our train pulled into 30th Street Station.

Last call for food and drink in the dining car was made in Trenton, New Jersey. A few of us are well past 12 hours of train riding. I’m still in the dining car. I’m still typing with my thumbs. The ear buds replaced my over-the-ear headphones. The battery ran out. They’re still charging. My battery for writing is running out as well.

There are still a few people left in the dining car, all typing on something. Some typing on smartphones like me and some typing on laptops. It’s peaceful, quiet and the space is half empty, giving us typists plenty elbow room to type whatever we want to type.

I wonder what the others are typing about. I know, none of my business. Just curious. I know, curiosity kills cats, no matter how cool they think they are. Okay, I will leave it alone. In any case, this is a nice way to end today’s trip.

We have left Newark, Jersey and soon we will pass the meadowlands. It will be too dark to see them tonight. I can imagine them.

I keep listening to “Get Down. The live version, “Ohh Yeah, Yeah.” Soon I will be staring at the Empire State Building as I make my way on foot from Penn Station to Grand Central. I’ll just go straight up 34th, turn left at Park. My bags are light and the entire trip is just a one mile journey.